Uganda is situated in the heart of Africa straddling the equator and is a lush, fertile country with amazing landscapes and abundant wildlife. It was described by Sir Winston Churchill as ‘The Pearl of Africa’. Discover the jewel of Africa – safaris are professionally run and highlights include: – tracking mountain gorillas and chimpanzees, game viewing in Uganda’s pristine National Parks and forests, plus mountain climbing. 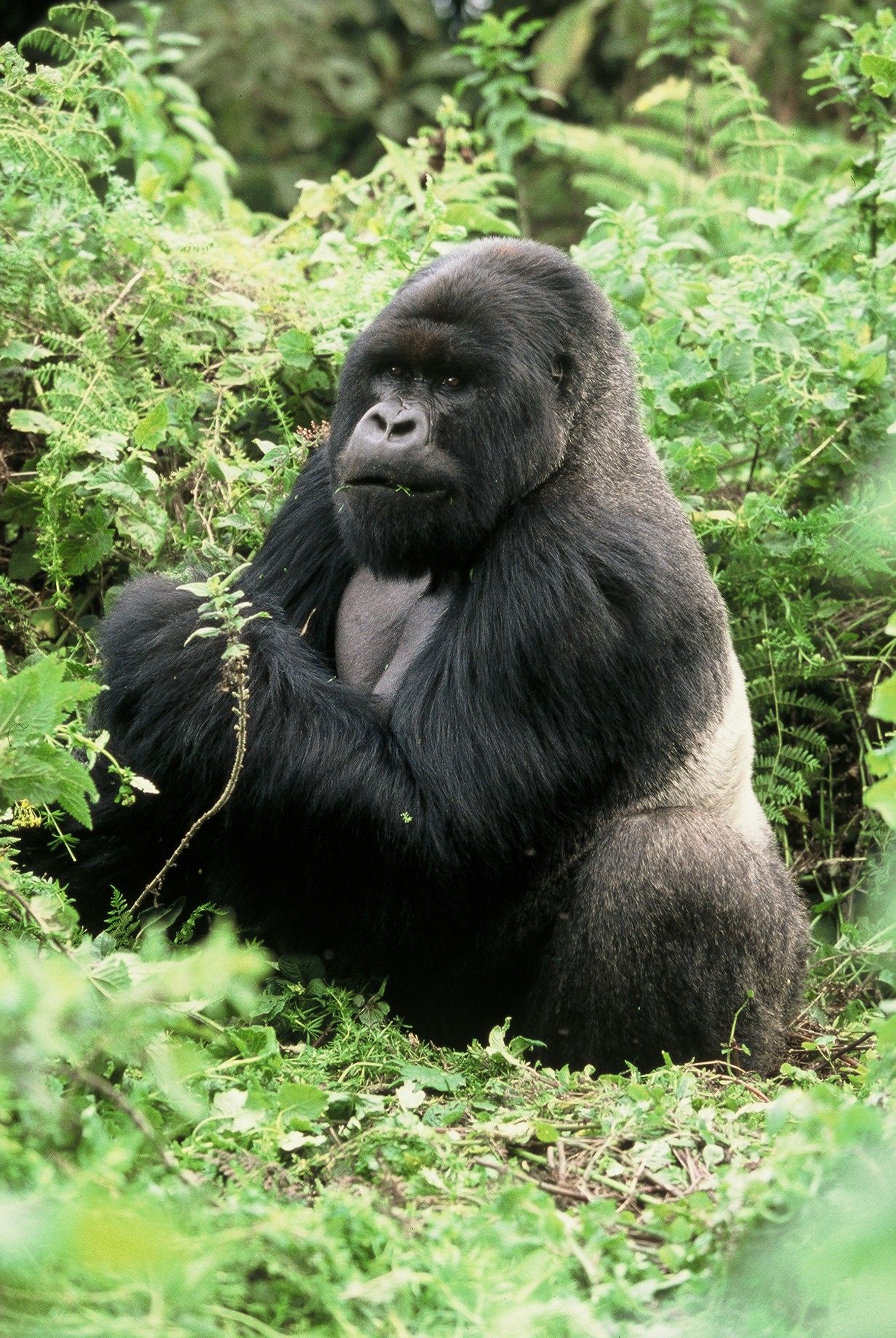 Climate
Being on the Equator, the climate varies little throughout the year and days are warm and dry. The main rains are in April-May, with some showers in November. It can rain almost any time, often in the evening or early morning. 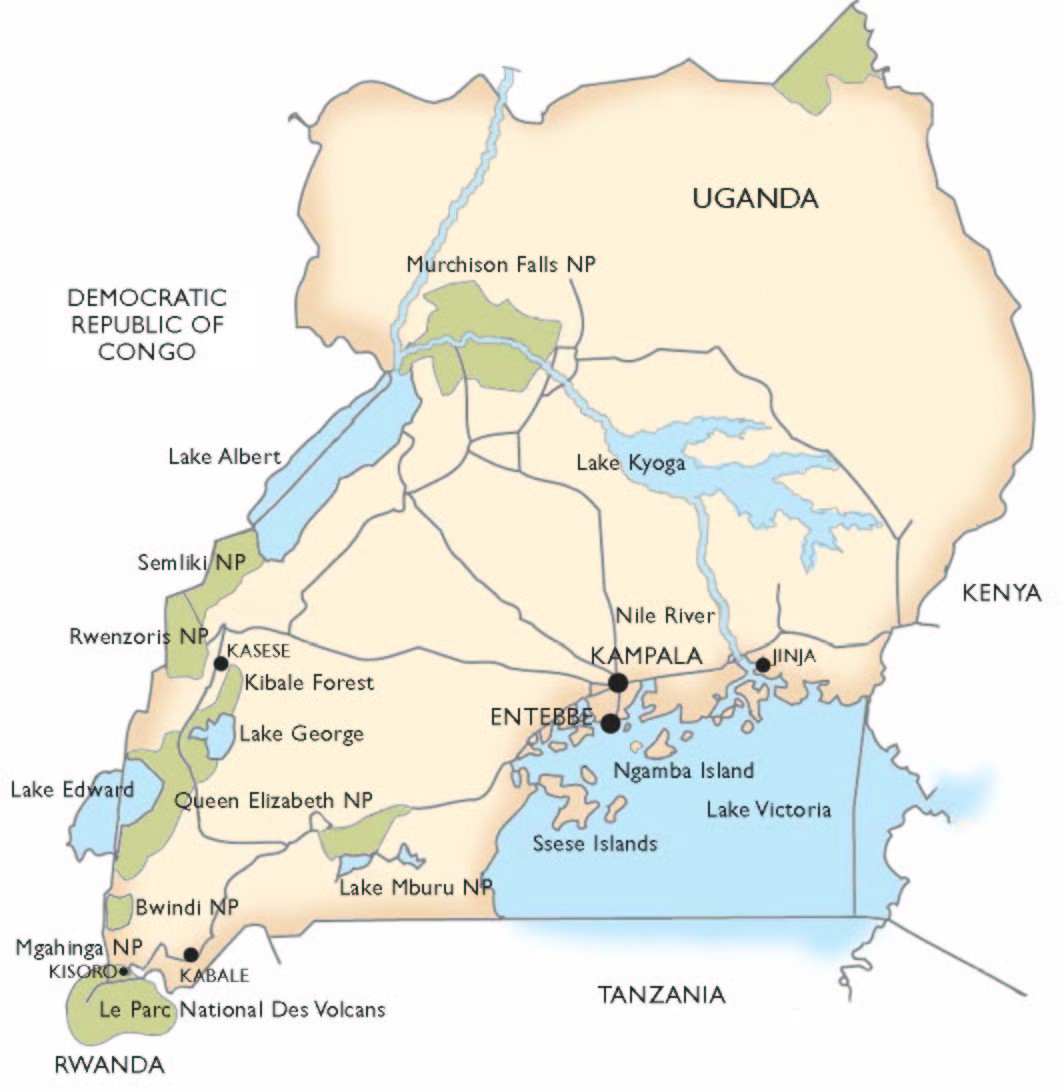 Where to Go?
Bwindi Impenetrable Forest
The name conjures up mystical images of deep forests; it is home to approximately half of the world’s remaining Mountain Gorillas. This ancient rain forest 321 sq km in area has over 90 species of mammals including 11 primates and ranks among the best in Uganda for forest birding with 23 Albertine Rift endemics present. A visit to Uganda would not be complete without spending a few days in this wonderful region.

Queen Elizabeth National Park
Located in the south-west of Uganda, this 1978 sq km park is over looked by the majestic Rwenzori Mountain Range, with open savannah, dense papyrus swamps, and rainforest and crater lakes. Little wonder that it boasts one of the highest bio-diversity ratings of any game park or reserve in the world. A bird count of 606 and almost 100 mammal species including the Uganda Kob, giant forest hog, plentiful hippo, leopard, elephant and good lion populations.

Kibale National Park
This is the home to 13 primate species including the red colobus and L’Hoest’s monkey. Kibale’s major attraction is the opportunity to track habituated chimpanzees ? these apes are tremendous fun to watch as they play in the forest canopy. A network of shady forest trails provide botanists and butterfly enthusiasts with a rare treat and there is a recorded 335 species of birds.

Murchison Falls National Park
Uganda’s largest National Park of 3893 sq km, protects savannah dissected by the River Nile. At the falls, the Nile squeezes dramatically through a narrow cleft in the racks before exploding into the bubbling pools below. Wildlife populations are on the increases. The lush grasslands support elephant, hippo, buffalo, giraffe, plenty of antelope as well as good populations of lion. The sought after Shoebill is often seen in the papyrus swamps of the Nile, and the BudongoForest is home to Chimpanzees and other mammals. Chimpanzee tracking is also permitted.

Ruwenzori Mountains of the Moon
The summit, Margerita, stands at 5109m and is Africa’s third highest peak. It is permanently ice capped and straddles atop the 120km range bordering the DRC. The Ruwenzoris are rated to be the most challenging of Farica’s peaks. The trails lead through rainforest into tall bamboo forest, before emerging on the high-altitude moorland zone with an eerie landscape of giant lobelias, towered over by black rocks, white ice and snow.

Semliki National Park
In a remote region of western Uganda, site of the Sempaya Hot springs, Semliki protects an extension of the Ituru Rainforest eco-system, and is of particular interest to birders with 40 species found nowhere else in Uganda! The forest harbors many mammals including primates, forest elephant and pygmy antelope. Activities here include chimpanzee tracking, night and day time game drives, walks or a boat trip on Lake Albert to view the rare Shoebill.

Mgahinga Gorilla National Park
This small park protects the Uganda portion of the Virungas, a chain of volcanoes bordering Rwanda and DRC. Gorilla tracking is the main activity here, but forest walks are most rewarding – see the local golden monkey and 12 endemic bird species of the Albertine Rift Valley. The scenery is spectacular flanked by nine volcanoes, the highest being 4507m. 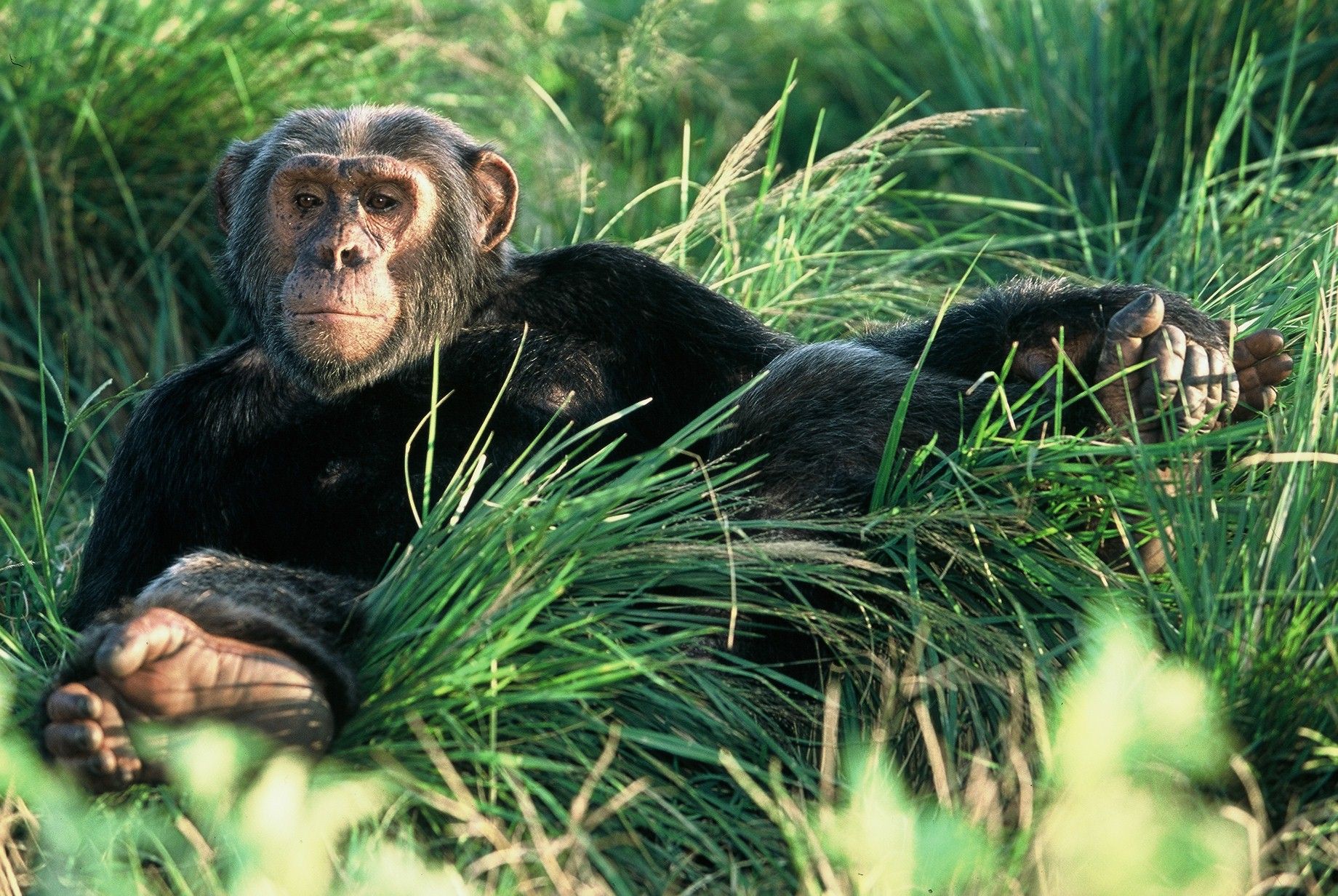 A short boat trip form Entebbe, a visit to this sanctuary which is home to over 30 orphaned chimpanzees only enriches the visitor and funds go directly to protecting chimpanzees in the wilds of Uganda. Supported by the Jane Goodall Institutes, this project will educate you about chimpanzees throughout Africa. As a highlight to your Ugnada safari we recommend an overnight stay; with the option of a forest walk in the company of a researcher and of course some of the chimpanzees.

MISSION STATEMENT
UWA’s mission is to conserve and sustainably manage the wildlife and Protected Areas of Uganda in partnership with neighbouring communities and stakeholders for the benefit of the people of Uganda and the global community.

Uganda has a diversity of wildlife. There are lions, zebras, buffaloes, elephants, leopards, baboons, giraffes, cheetahs, Uganda kobs, the rare situtungas, water bucks, bush bucks, bush pigs, chimpanzees and many more.A wide variety of mammals. For further reading refer to the field guide to African mammals by JonathanKingdom and The Behaviour Guide to African Mammals by Estes.

Chimpanzee (Pan troglodytes)
Are one of the three members of the Great Ape family found solely in Africa. (Gorillas and  Bonobos are the other two species in Africa; while Orang-Utans are found in Asia) Chimpanzees once inhabited the entire equatorial zone, but their habitat is slowly disappearing as human populations increase and encroach on the forest. They are found only in 21, countries remaining in fragmented populations and isolated due to human encroachment. They are endangered and specially protected by CITES. Currently the major threast to the survival of the species are illegal poaching for ?bushmeat’ and the pet trade, as well as deforestation for agriculture and logging.

Gorilla (Gorilla gorilla)
There is one group of habituated gorillas in the MghingaGorillaNatPark consisting of 11 individuals and the Rwanda Mountain Gorllas where there are four groups. Bwindi Impenetrable forest has two main groups. All families have been habituated for trekking since Diane Fossey’s days in the eighties. Gorillas are extremely suceptible to human diseases so only a maximum of one hour is permitted to observe the gorillas. Their endangered status is specially protected and the reasons for this are the same as chimpanzees. 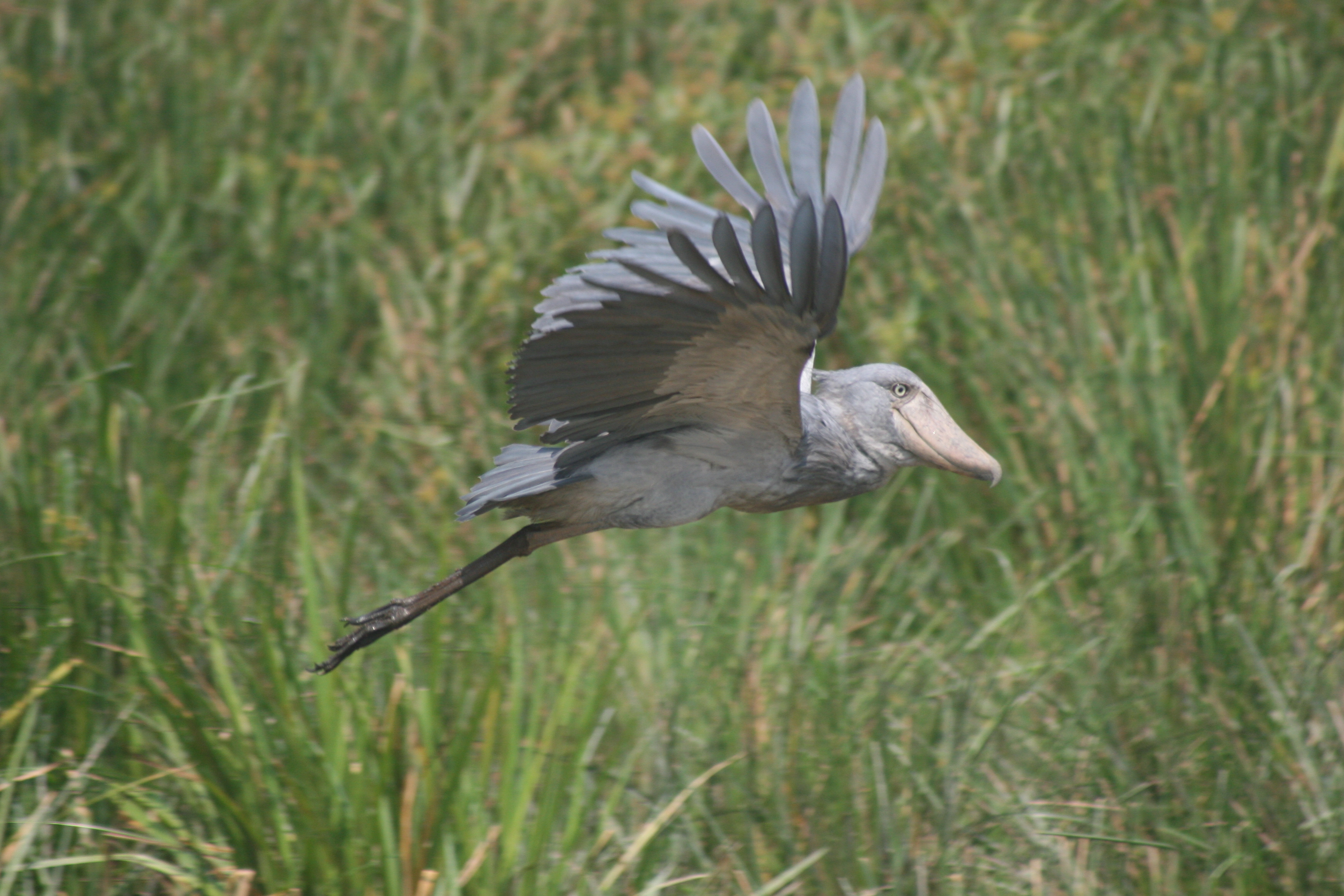 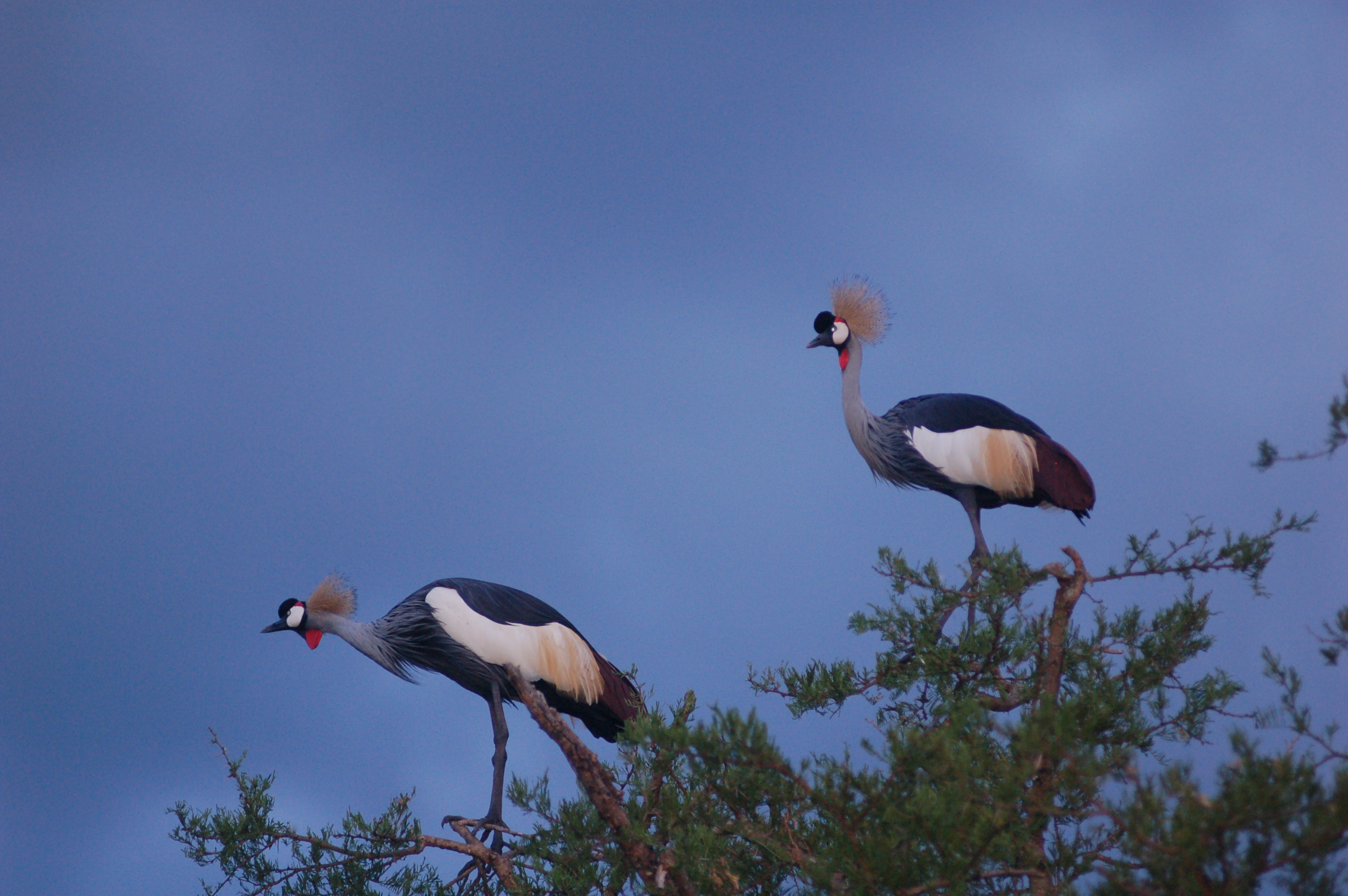 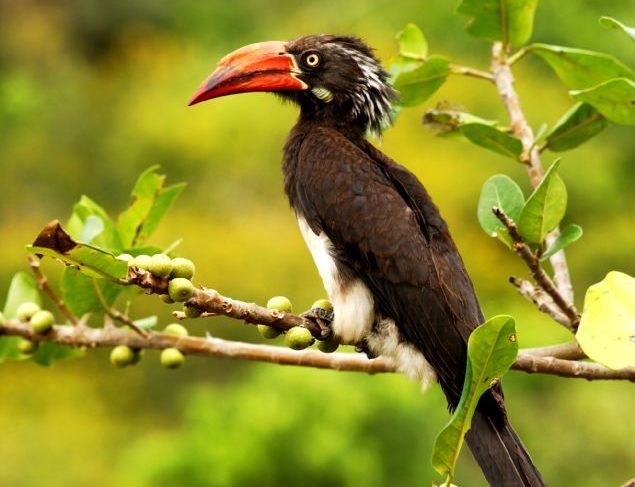 With over 1000 bird species, including most of the 28 rift valley endemics it is fast becoming a popular destination for African birding.
Hotspots to find them are: The Bwindi Forest – 380 species, The Queen Elizabeth National Park ? 615 species; The Kibale Forest 300 species; The Budongo forest and Murchison Falls.
Specialisties include:- Black-headed and Papyrus gonoleks, Blue-breatsed and White throated bee-eaters, Blue breasted Kingfisher, Green breasted pitas, white-thighed hornbill, black-billed Tauraco, and Shoe-bill to name a few.

Shoebill Balaeniceps rex
“Endemic to Africa, where it is one of the most sought-after species. An enormous blue-grey bird with massive. mottled, yellow-grey bill and a small, erect crest. Flight surprisngly bouyant on massive wings. Possible related to pelicans, but usually placed in a monotypic family. 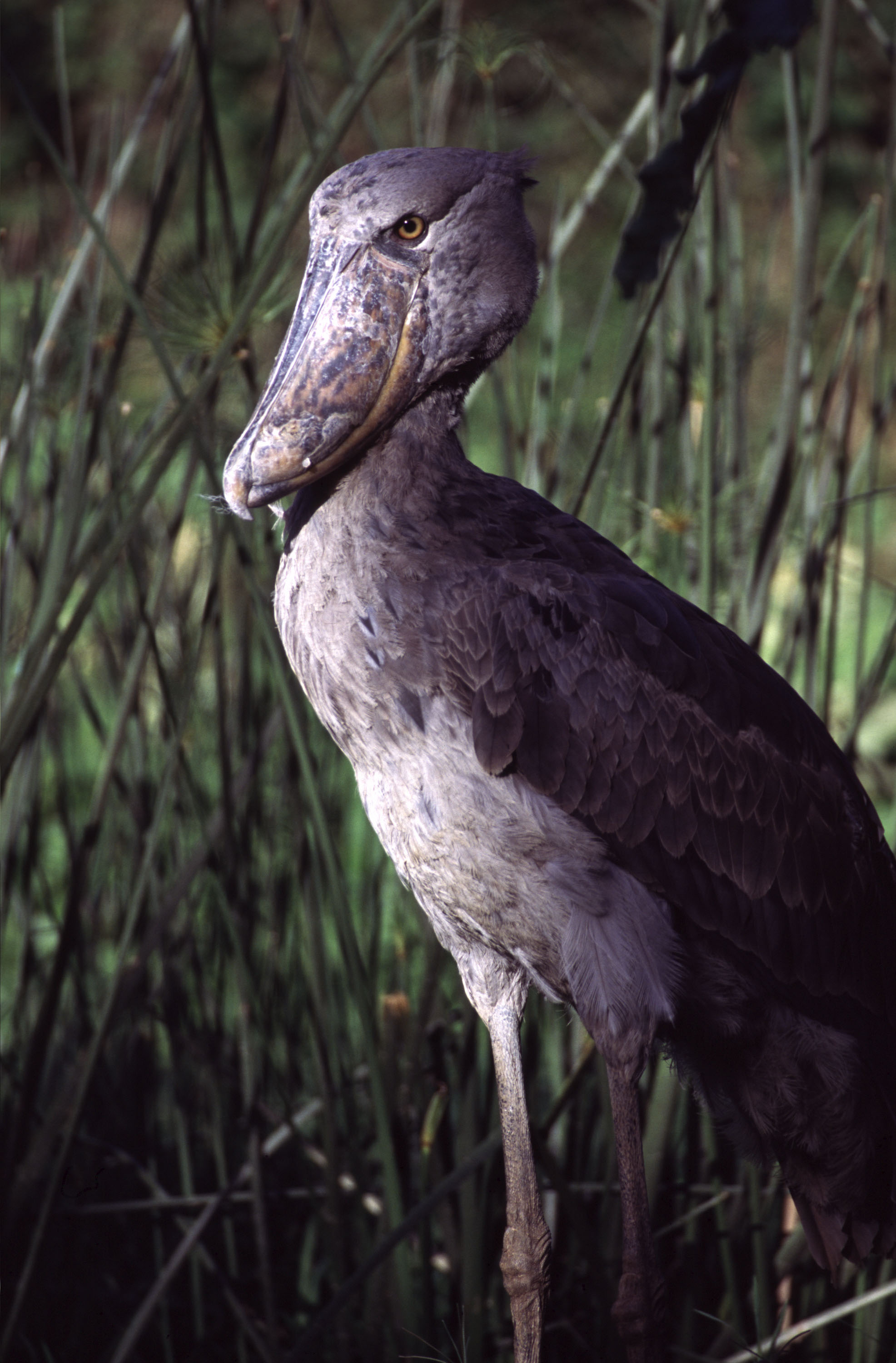 Fishing for Nile Perch is incredible. This is the worlds largest fresh water game fish, with specimens of over 250 pounds (well over a 100kg) having been taken in the rapids below the Murchison Falls. As all fishermen know, its often not just the fish but the location that makes it special – rock ledges and spurs below the falls, the huge, deep, fast river, and the dense riverine forest at your back – as well as the crocodiles, elephant, and hippo in the area makes this a classic spot for only the few dedicated anglers who come here. Fishing here is restricted to 6 persons per day, adding to the exclusive experience – and must be booked in advance. 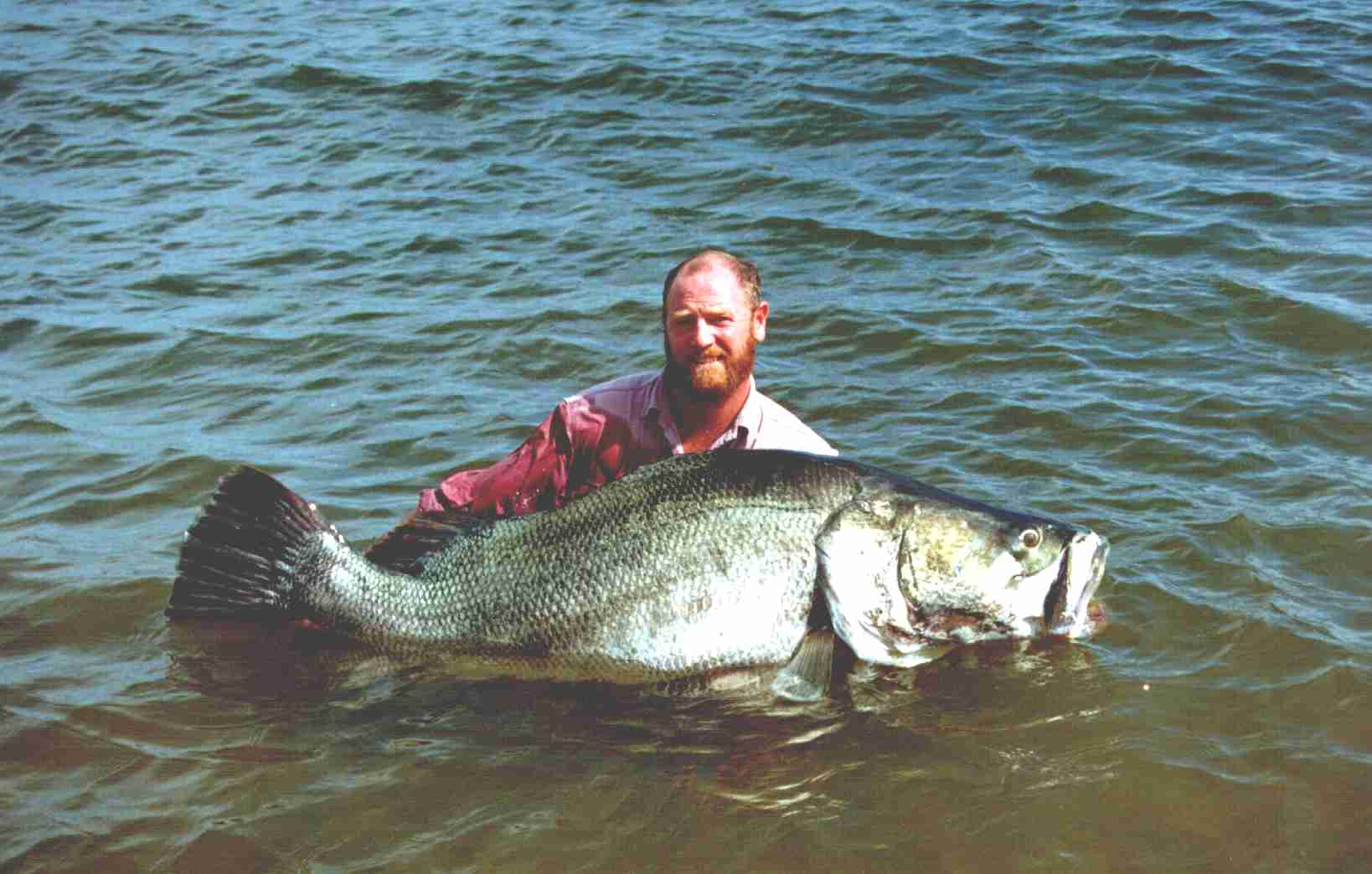 Professionally run fishing trips on Lake Victoria for Nile Perch range between 20-250 pounds in weight, the largest fresh water game fish in the world, (unofficial World Record 250.8 pounds caught in the Entebbe area August 1998). Trolling with lures is the main method of fishing, with drift and live bait fishing an option. All the necessary fishing tackle for Nile perch trolling is provided, but anglers are encouraged to bring their own favoured equipment.  For our day trips, fishing is done around local islands some 40 minutes by speedboat, from Entebbe.

Travel to Uganda is a Special Interest Safari – Contact Plains of Africa to enquire about the Safari Itineraries to this remarkable country! 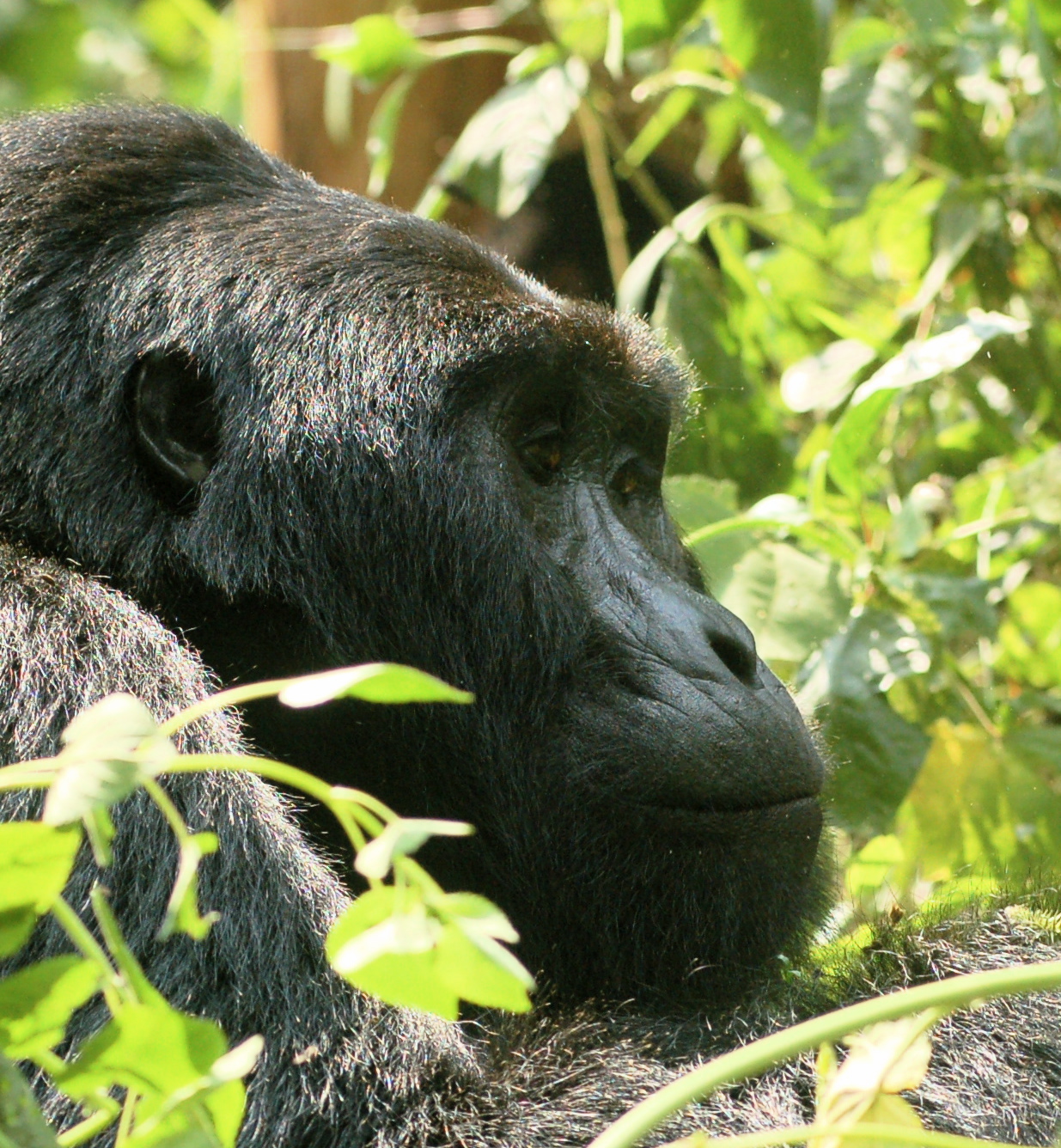 The world became aware of the plight of Africa's gorillas mostly through the dedicated work of Diane Fossey in the Virunga mountains. This was once again brought to the fore in 1988, with a major motion picture starring Sigourney Weaver in the an American film...

Did you know that there is estimated to only be 880 Mountain Gorillas remaining in the wild.  Go on a trip of a life time! Contact us to arrange your authentic safari experience! We have lots of exciting safaris. Here's a summary below. Best of Uganda Gorillas,...