Botswana is an exciting destination, with about 80% of the country is covered by Kalahari Sands. Located in these sands is the Okavango Delta and River systems to the north including Kwando, Linyathi and Chobe River systems. The abundant water offers a haven for both flora and fauna and is renowned for its great beauty and diversity. Botswana has a rich mix of African cultures the largest tribal group being the Botswana forming about 50% of the population. The original inhabitants some 2000 years ago were the San Bushmen. A fascinating Kalahari safari experience with these most ancient of all people is almost a ‘must do’ in your itinerary. Plains of Africa have hand picked the best destination in Botswana to suite a variety of tastes. Take a look at some of them here

Botswana can be visited at any time of the year – summers are generally hot and winters mild with a few cold spells. Seasons: High July 1 to October 31; Shoulder: March 1 to June 30 & November/December 1 to 31

Central Kalahari – A vast waterless wilderness with unique and interesting desert species of plant and animals. Fascinating experiences with bushman communities who live on the fringes of this area. Plains of Africa have a special safari lined up for you in this area.

Chobe National Park – Famous for large herds of elephant along the Chobe river, excellent birding and game viewing. There are a number of lodges in the northern section at Kasane However, service and standards are varied and it tends to be touristy. Traveling into the Savuti region situated in the heart of the park along the Mababe depression is excellent for predators and other game and more of a rugged wilderness experience.

Lake Ngami – This was first reported by Dr David Livingstone and when it floods is the home of countless thousands of water birds easily accessed from Maun.

Magadikgadi Pans – 140,000 sq kilometer ancient sea, formed approx. two million years ago is renown for its beauty and incredible vistas. It is a major breeding site for greater and lesser flamingos. The western grasslands are home to huge herds of migrating zebra and wildebeest and lion prides between February and March.

Moremi Game Reserve – Situated on the Eastern edge of the Okavango Delta offers a wide diversity of habitats and species of wild game and has become a popular tourist destination. Best game viewing time is from April to October.

Okavango Delta –  a vast 15,000 square kilometer wetland oasis in the heart of the Kalahari sands. A mired of flood plains, lagoons, islands, a tropical paradise with incredible wildlife and bird life viewing. Exclusive camps and lodges in magnificent settings, a must do!

Tuli Block – A deeply eroded sandstone landscape has its boundaries on the Limpopo river. Animals to be found here include, elephant, lion, giraffe and other plains game. Historically it was conceded to Rhodes, ‘British South Africa Company’, in 1895 by Chief Khama for the railway from Mafekeng to Rhodesia. The route required too many bridges so was moved further west. The area was later divided into farms for European settlement many of which are now conservancies.

Tsodilo Hills – In the remote northern western part of the Kalahari is a group of four isolated hills. Among these 800 million old hills are more than 4000 rock paintings by the ancestors of the san people and have deep mythological and religious value. Some paintings are older than 2000 years. A unique and fascinating experience to hike up into the hills and exploring the ancient rock art. 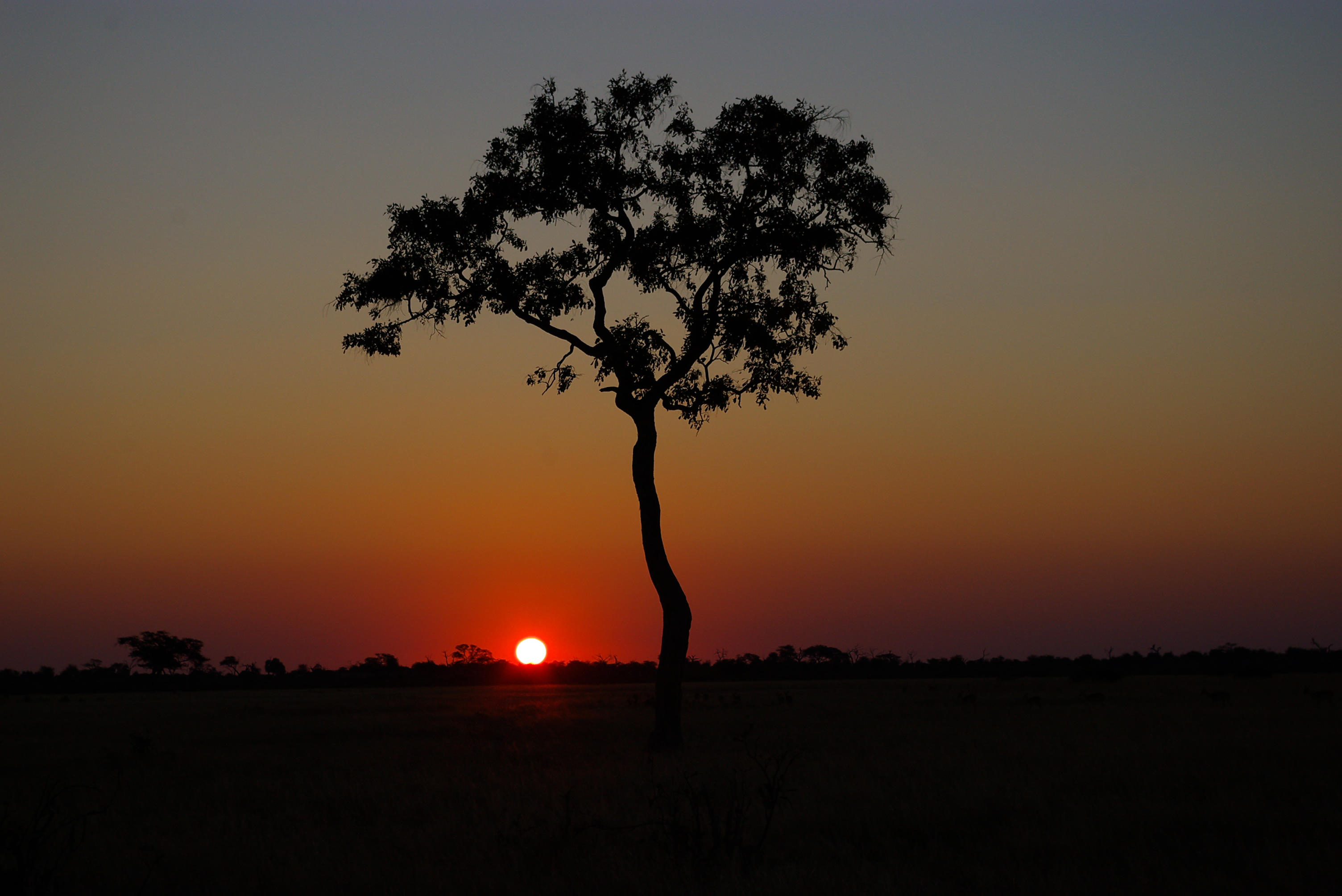 Culture – a wide diversity of tribal peoples with their interesting traditions and ceremonies reflecting their heritage. Special focus on the Kalahari Bushmen.

Cycling Safaris – A more chalenging way of exploring and experiencing africa,led by armed rangers, safety is of prime concern. Intensity and duration of each ride is dependent on the capacity of the participating cyclists.

Game Drives – these are operated in open vehicles, usually at dawn and dusk to seek out the most interesting wildlife. Night drives are also available in private reserves.

Makoro (Dugout canoe) Safaris – glide with your private poler through the delta in a traditional dugout canoe. A mokoro was used by the orginal inhabitants of the Okavango Delta. This is a quiet and slow way of travelling throught the shallow channals of the delta, relax and sit back and absorb the magical variety of birdlife, crystal clear waters and beauty of the lagoons and waterways.

Motor Boat Trips – These are used in the deeper channals that are too deep for mokoro’s giving acess to large laggoons. They are noiser and disturb the wildlife and their wake can be harmful in areas where there are nesting birds e.g. the african skimmers nest on sand bars/banks. Boat trips can be good providing they are run considerately – encourage your guide to go slowly, you will see so much more as a result.

Horseback Safaris – led by experienced rider/guides offering bird life and game viewing opportunities and exploring remote untouched areas. These trips are generally for experienced riders who can confidently gallop out of danger. They last 5 to 10 days and take a maximum of 8 riders at one time.

Walking Safaris – there is no better way of getting really close to nature than this. Lead by experienced armed guides/rangers/trackers, walkers are able to enjoy the sights, smells and sounds of the bush in harmony with their surroundings. 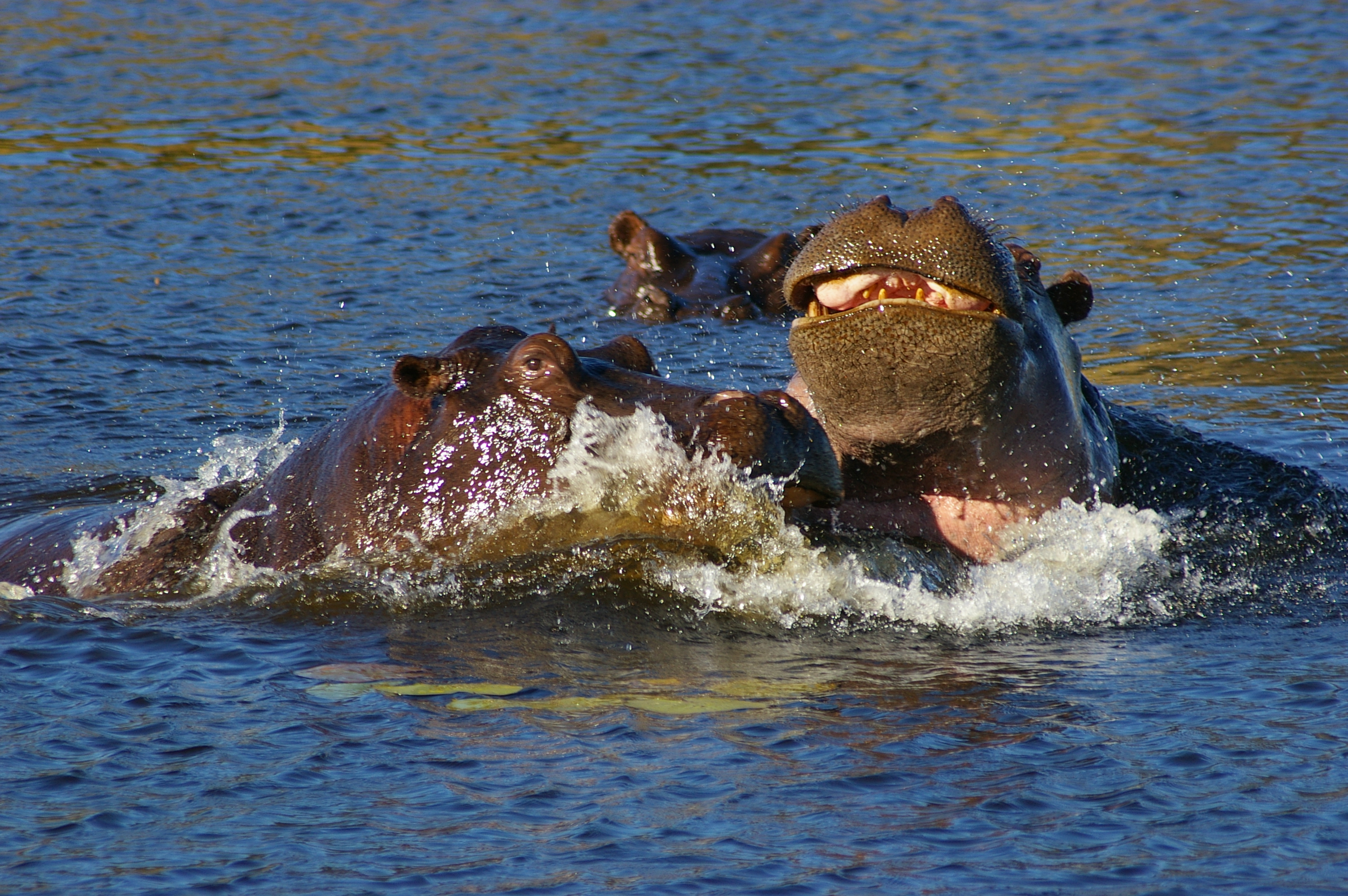 The Okavango Delta and surrounding reserves of Northern Botswana support one of the last assemblages of large, free ranging mammals. This includes African elephant, wild dog, Tsessebe which occur in the greatest numbers than anywhere else in africa. The reclusive and rare Sitatunga, an adapted swamp antelope, is found no where else south of the Zambezi . Lion, leopard and cheetah occur in good numbers.

The Northern Chobe /Caprivi river system is the only area in Botswana and in fact Southern Africa where one will find the Puku. This is also found with the red lechwe occuring in small herds near water. The riverine habitats are good places to find the Chobe bushbuck with its marvellous colours and coat markings. The Chobe River has plenty hippo, crocodile, and the largest herds of elephant found anywhere in africa. Sable and Roan antelope are a special especially in the woodland areas, or at pans and rivers when they come down to drink.

The Central Kalahari has specials like the desert lion, brown hyena,gembok and kudu are also common.

Did you know that Botswana hosts:

Do You Enjoy Seeing These- And Other Birds? Why Protect Birds?:

An Authentic Adventure Mobile Safari To The Savuti With The Wilmots!

The name ‘Wilmot’ is a legendary name in the frontier world of Northern Botswana, a family name steeped in history stemming from one of the old pioneering families in Botswana. Lloyd and Daphne Wilmot journeyed as children with their parents, who had packed up and...

A True Wilderness In The Chobe National Park, Botswana

Witness the power of nature first hand. Our safari portfolio offers you spectacular game viewing opportunities that allow you to get up close and personal with some of nature's biggest personalities. The area is renowned for the elephants which drink from the Savuti... 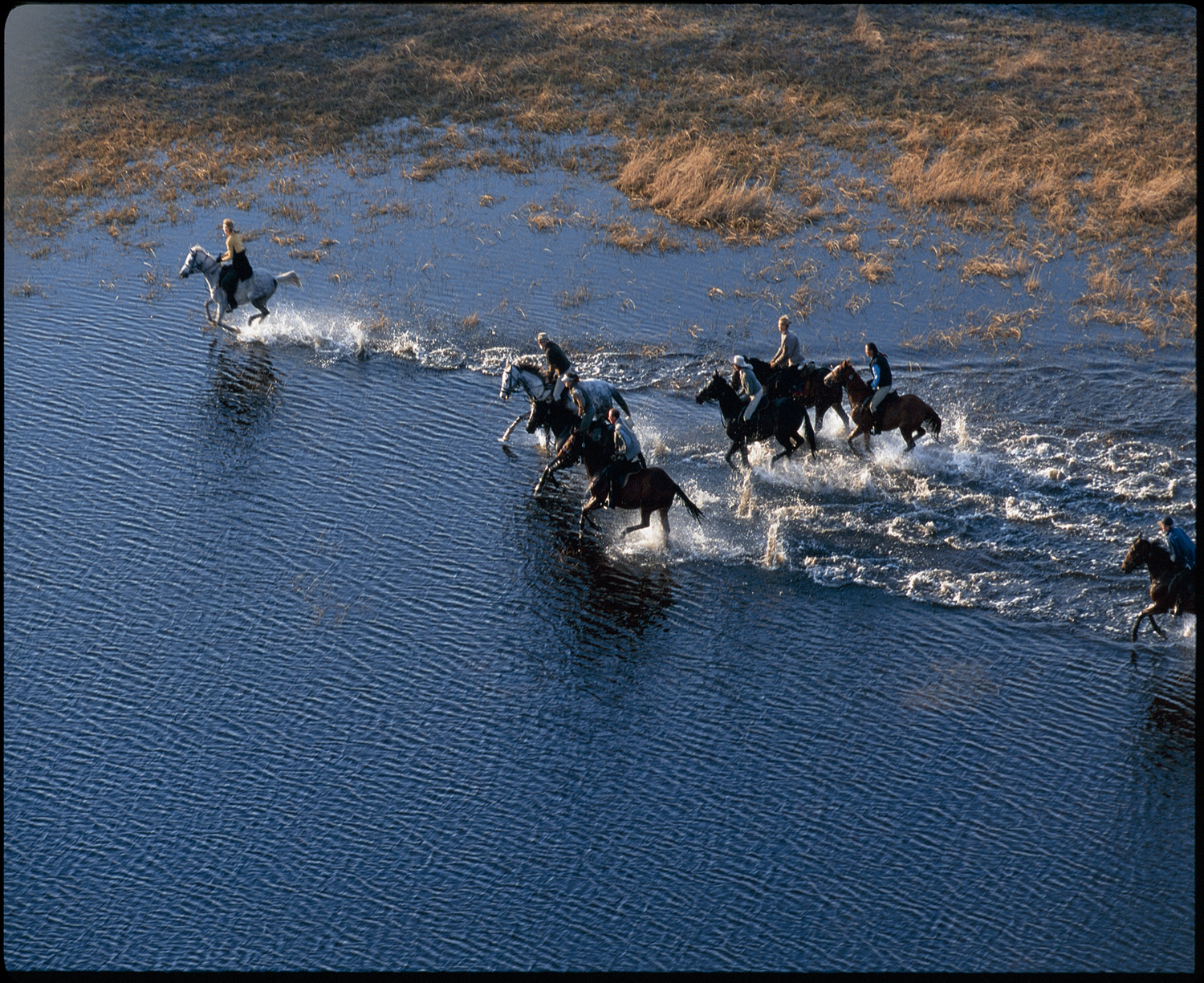 Great Horsetreks of the World – Botswana

"Imagine yourself mounted high above the long grass and reeds watching great herds of wildebeest and lechwe as they move across the golden floodplains. The breathtaking excitement when your silent progress along game paths only used by animals brings you upon a herd... 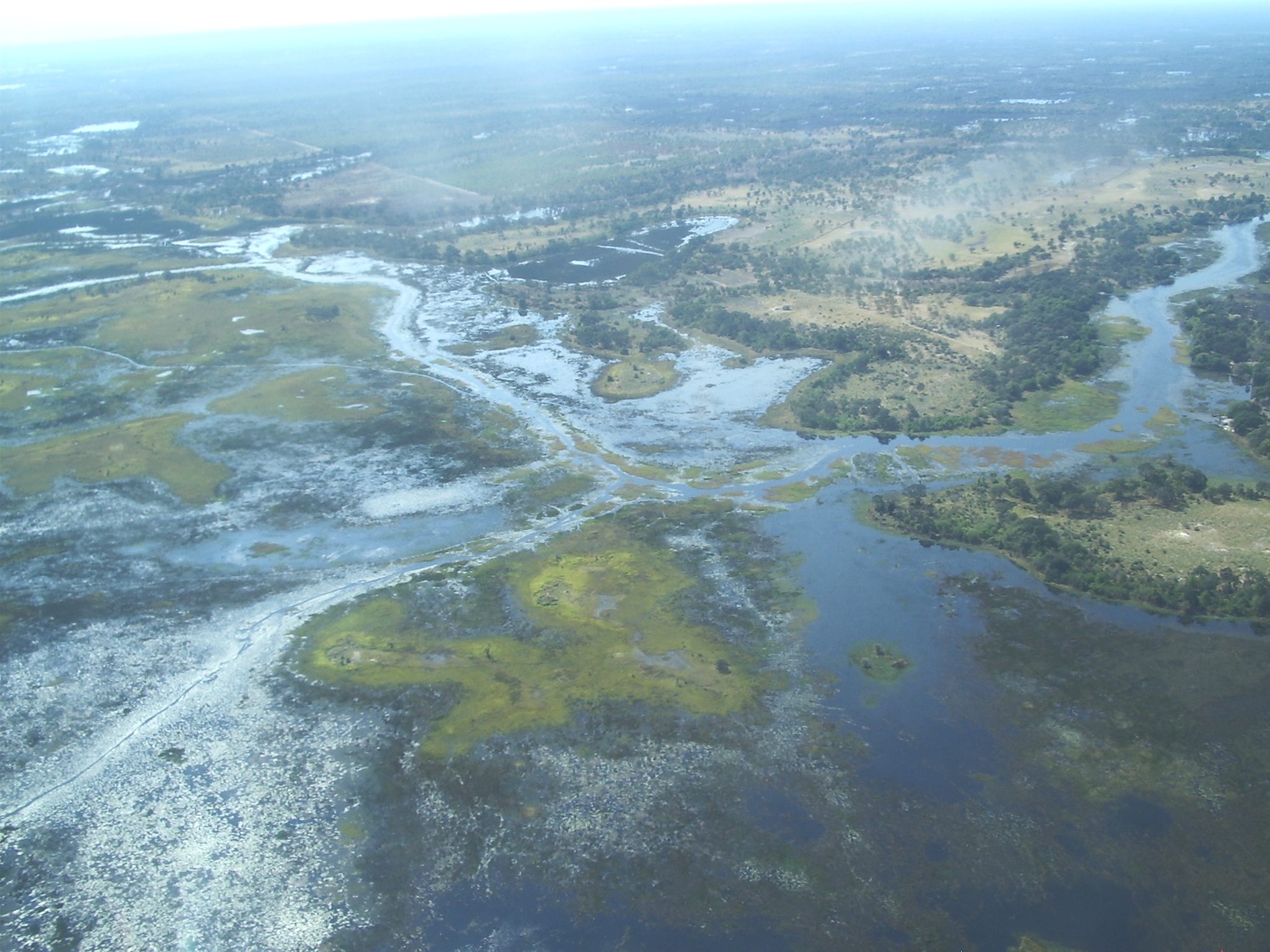 A life experience like no other... Discover Africa up close and personal ! Okavango Delta (covering an area of 18 000kmsq in full capacity - Roodt.) Is a myraid of waterways and channels with spectacular flora and fauna. This safari experience is a must! Travel with...

Situated on the western border of the Magadigadi National Park, Leroo La Tau sits on 15metre high cliffs overlooking the Boteti River, a once -dry river which began flowing again in late 2009 after two decades of unexplained drought. The Magadigadi is home to the...